On Saturday, January 11th, couples from the Village of East Hills gathered for some highly competitive and fun-filled sports competition. The East Hills Tennis Tournament took place at the Robbie Wagner Tournament Training Center. Steve Alhadeff, the East Hillsâ Tennis Pro, organized and conducted the event, held in the evening between 6-8pm.

The competing couples competed in a âround robinâ doubles format, in which every duo was pitted against another. The Tournament features highly experienced tennis players with considerable athletic ability.
Following many rigorous and challenging rounds, East Hillsâ residents Rob and Nikki Yenchman emerged as the champions.

Mayor Michael Koblenz said âThe tournament is yet another outstanding event in our community. Congratulations to all involved for continuing a great tradition in our Village.â

Steve Alhadeff stated, âAll the participants enjoyed the competition and had a lot of fun. That certainly spells success.â 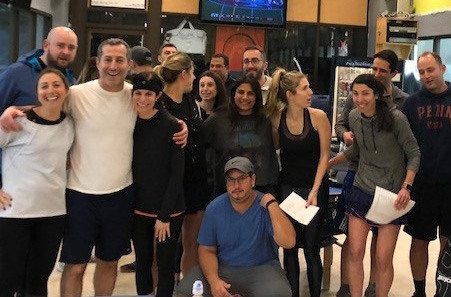 Pictured are some of the residents who attended and participated in the tennis tournament.